Governor Glenn Youngkin reports that the number of employed Virginians rose by almost 4,500 in Dec.

The Virginia unemployment rate remains below the national rate of 3.5 percent.

The governor noted that the growth was overwhelmingly led by the private sector providing 86 percent of year over year job growth.

Job growth averaged 9,000 a month over the past year.

That growth is twice the 2021 average and 28 percent more than the pre-pandemic average in 2019.

Virginia unemployment rate remained in a narrow range of 2.6 percent and 3.0 percent for much of 2022.

As we do every Thursday, we check in with Warren County in our latest news maker.

Todd assures us that the Warren County Board of Supervisors are doing every thing they can to deal with the issue of the reassessments.

He reminds us of all the avenues to take advantage of in appealing your assessment.

Todd also reminds us that board members are county residents and have to pay those higher taxes along with their constituents. 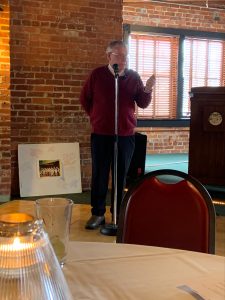 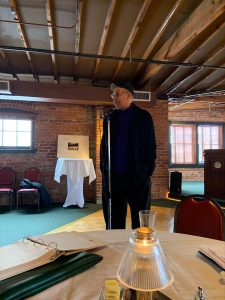 This past weekend I was asked to attend what I termed “a formally informal” event at Piccadilly Public House in downtown Winchester to be part of the oral history of Handley High School Athletics. The discussion was recorded and documented as part of the 100th anniversary of the aforementioned Handley High School, and I was honored to be one of a number of former athletes, coaches, administrators, and in my case, broadcasters who have covered the Judges over the years. It was an emotional afternoon, and there was much laughter, along with some tears, and lots of memories. It was a humbling experience to be a small thread in the vast tapestry of Handley history.

The great Andy Vipperman, who was an integral part of the 1994 Handley State Football Championship team, did a superb job as emcee, and it was wonderful seeing familiar faces like basketball coaching legend Tommy Dixon (pictured,r), former Judges athlete-turned-administrator Reed Prosser, and longtime AD Jimmy Omps (pictured,l), who had the absolute best press box food spread in the area on a Handley Bowl football Saturday! They, and many other notables stepped up to the microphone to talk about “Handley Pride.”

My part of the afternoon was recalling the 1984 and 1994 Handley State Football Championship games, which I had the pleasure of broadcasting. 1984 was probably the first year that I did play-by-play of local high school football, and to follow the Judges all the way to a state title was quite an experience. That season, the Handley defense was instrumental in their success, and as is the case with all great defenses, they had a nickname: Judges For The Defense. Handley rode that defense all the way to UVA’s Scott Stadium in Charlottesville, where I thought I had died and gone to sportscaster’s heaven.  The memory of the game itself is a bit hazy after almost 40 years, but I do know that one Tommy Stine had a great game, as the Judges brought a championship trophy back to Winchester. Tommy was in attendance Saturday, and it was great reminiscing with him.

The memory of the 1994 State Championship Game is much clearer. Clear as mud, because that was the playing surface at Gate City, Va., where signs said “Welcome To Hell.”  Because mud was the only thing that could have stopped the high-powered Judges, the homestanding Devils decided to water down their field the night before the game, turning it into an unplayable quagmire. The game was played anyway, the Judges took it all in stride, and despite some nail-biting moments at the end, won 12-7, giving Coach Ron Lindon his second state title in 10 years.  Dan Gloster, one of my broadcast partners back in the day, was one of many on Saturday afternoon to remember Lindon as a great coach, but a better man.

For me, Handley Pride is a Judges’ home football game. The Friday night lights may shine bright, but the greens, golds, and reds glow even brighter on a Fall Saturday afternoon between Jefferson Street and Handley Boulevard. It’s there that you feel the sense of community as Winchester gathers to cheer on the Maroon and White. Last Saturday at Piccadilly, Andy Vipperman wanted my perspective of Handley Pride as an outsider. In reality, for more than a decade, I experienced Handley Pride as an insider, with a microphone and a great view from the Handley Bowl press box.

Until the next visit from The Booth…GO JUDGES!

Hummer brings over 18 years of experience in public education to the position.

Hummer will leave his position as chief Student Support Services Officer at Stafford County Public Schools and take over as FCPS’s Superintendent on January 30.

The new Superintendent commented that he hopes to get started right away and plans to connect with various stakeholders in order to gain a better understanding of what is valued within the community and the school division.

On his first morning on the job Hummer plans to greet students and interact with staff and engage in a listening tour in order to hear the perspectives of students, parents, staff and members of the community.

The relationships and spirit Hummer intends to build as Superintendent will be critical to working together to move the school division forward.

LAST NIGHT’S HIGH SCHOOL BOYS BASKETBALL GAME  BETWEEN CLARKE COUNTY AND STRASBURG WAS POSTPONED. THAT GAME WILL BE PLAYED TONIGHT WITH AN AIR TIME OF 7:20. RYAN RUTHERFORD HAS THE CALL ON FOX SPORTS RADIO 1450.

IN OTHER BOYS ACTION…

MUSSELMAN AT SHERANDO WAS ALSO POSTPONED

TO THE ICE, WHERE THE CAPITALS RETURN HOME TO FACE TORONTO TONIGHT, WITH A 7PM PUCK DROP AT CAPITAL ONE ARENA. THE CAPS HAVE DROPPED 3 OF THEIR LAST 4.

At the Australian Open tennis tournament…

Women’s 3-seed JESSICA PEGULA was defeated by VICTORIA AZARENKA. Pegula was the highest-ranking American left in either women’s or men’s singles at the event.

Governor Glenn Youngkin announced  the passage of his tax relief proposal by the House of Delegates.

The legislation is now heading to the Virginia Senate for consideration.

The Governor called the approval a step toward additional tax relief for Virginians and their families as well as local business.

The proposal includes reductions in individual income tax which means 86 percent of Virginians see a lower top tax rate and an additional 14,000 Virginians will not pay state income taxes.

The reduction of tax rates for business will result in lower taxes for approximately 475,000 resident small business owners and local business across Virginia.

The Governor stated that Virginians are simply overtaxed and deserve to keep more of their hard-earned paychecks and hopes for passage of the package by the Senate.

Communities and fire companies across the region expressed their sympathy for the loss.

Even after lifesaving procedures were initiated they were unable to revive Cross who was pronounced deceased while in the line of duty Jan. 23 at approximately 9:30.

The cause of death is believed to be medically related but remains under investigation by Warren County Sheriff’s Office in consultation with the Chief Medical Examiner of Virginia’s Office.

Cross served for many years and was a founding member of the Fortsmouth Fire Company.

Ben Cline has been awarded the chairmanship of the Republican Study Committee Budget Task Force.

We spoke to the Representative in our latest news maker.

News makers are sponsored by Warren County Together We are Community.

The Representative exactly what the appoint means and what it entails.

He also tells us what the priorities are for the 118 session of Congress.

Ben also tells us about the opening of his new office in downtown Winchester and how easy it is to get in touch with he and his team.

THE CAPS DROPPED A 3-2 DECISION TO COLORADO LAST NIGHT. THE CAPITALS FELL BEHIND 2-0 AND COULDN’T CATCH UP AS THEY LOST FOR THE 3RD TIME IN 4 GAMES. ALEX OVECHKIN HAD ONE OF THE 2 GOALS FOR THE CAPS, WHO RETURN HOME TO FACE TORONTO TOMORROW NIGHT…AIR TIME IS 6:45 ON FOX SPORTS RADIO 1450…

Berkeley County Prosecutor Catie Wilkes Delligatti confirmed that she is going to ask a special prosecutor be appointed to review the accident involving the daughter of the Berkeley County Sheriff.

Sheriff Nathan Harmon’s 22-year-old daughter Carrie was involved in a single vehicle accident on Jan. 6 in which she ran off the road and damaged property on Cemetery Road in Berkeley County.

West Virginia Metro News reports that Harmon did make his way to the scene to make sure his daughter was medically sound.

Harmon also wishes to be totally transparent in the incident and called the wreck a basic traffic accident with no sign of alcohol being involved.

Henderson replied that he couldn’t tell with no mention of alcohol or drug use in the official report.

Prosecutor Wilkes Delligatti wants to ensure total transparency with the appointment of the special prosecutor.