Well, the booth for me this Saturday (12-10) will be the press box at City Stadium in Salem (Va.) as I, along with my broadcast partner Ryan Rutherford, get to call the VHSL Class 2 Championship Game between the Woodstock Central Falcons and the Graham G-Men from Bluefield. For me it’ll be my fifth state title game as a play-by-play announcer, having called the Handley Judges championships in 1984 and 1994, and Sherando’s 2 title game appearances in ’95 and ’96. It’s a huge thrill to broadcast a state championship game, knowing that you’re painting the picture for lots of folks back home that can’t be at the game, some hanging on every word.

This time we head to the former site of the NCAA Division-III championship game, the Stagg Bowl, and there’s some irony in that. In my 22 years broadcasting college football, I always dreamed having our local team go the Stagg Bowl and calling the game, but that never happened.

Anyway, win or lose on Saturday, it’s been a memorable season for the Falcons. Last year, Central just missed getting to the promised land, losing in the state semifinal to eventual champion King William. This season, the Falcons fought their way back to the state semis, where they took care of the unfinished business from 2021, beating Poquoson 37-10. Now, they must defeat an undefeated Graham team that also has unfinished business, having lost to King William in last year’s title game.

For a further breakdown of Saturday’s Class 2 Final, I’ll direct you to the Podcast section of this very website, where you can navigate to The Sports Dogs Podcast. What I wanted to do in this post is share a great video from the end of last weekend’s Central semifinal win over the Islanders. I guess the Gatorade bath has become somewhat cliche in sports, but it’s still fun to see a team trying to be clandestine and sneak big tubs of the sports drink close to the head coach and then soak him.

Falcon’s Coach Mike Yew was too smart for that. In an interview this week with Yew, he indicated that because of high blood pressure, he preferred not to have the Gatorade dumped on him (this coming from a man who superstitiously wears cargo shorts on the sideline regardless of the weather conditions). In the waning moments of Central’s win, he either knew it was coming or was tipped off, and an assistant got the bath instead.

Should the Falcons win the state title this Saturday, I have a feeling Yew won’t mind “taking one for the team.”

Enjoy the video…and from high above the field at Salem City Stadium…GO FALCONS!

There is one area football team still alive in the VHSL playoffs, and it’s the Woodstock Central Falcons, who defeated Poquoson last weekend to advance to this week’s Class 2 State Championship game against Graham. The Sports Dogs look back at the win over the Islanders and take a look at Saturday’s title game at Salem City Stadium! Don’t forget, we’ll have the play-by-play starting at 4:10 on The River 95-3 and Fox Sports Radio 1450. 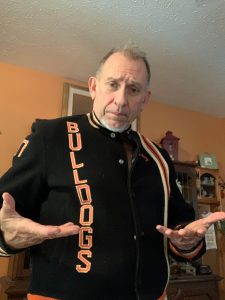 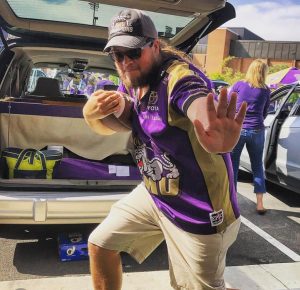